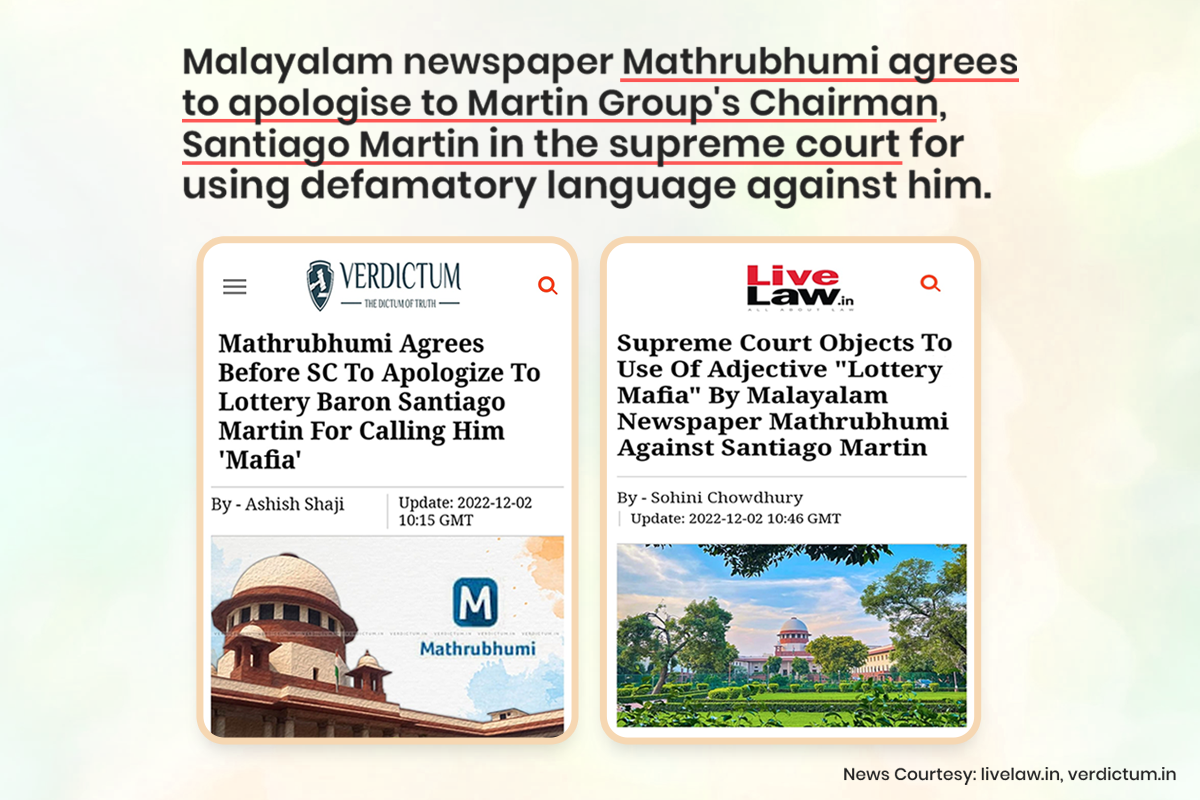 A news item was published in the Malayalam daily newspaper “Mathrubhumi” on 19.12.2019, purportedly based on an oral address made to the press in New Delhi by the then Finance Minister of State of Kerala, Dr. T.M.Thomas Issac which contained slanderous statements against Mr. Santiago Martin.

Mr. Santiago Martin, the authorized agent by the State Governments for the promotion and sale of Paper Lotteries of various Governments has filed a Criminal Complaint Case before the Judicial Magistrate First Class at Gangtok, Sikkim on counts of defamation under various sections where Mr. T.M. Thomas Isaac, the former Finance Minister of Kerala as first accused and the Managing Editor and other Top Officials of Mathrubhumi daily have also been arrayed as accused. They were proceeded against by the Court and summons were issued for personal appearance. Mathrubhumi Printing and Publishing Company Limited have challenged the order of the Judicial Magistrate, First Class at Sikkim taking cognizance before the High Court of Sikkim in Crl.Misc. Case No. 06 of 2021 praying for quashing of the complaint filed by Santiago Martin. The High Court of Sikkim declined to interfere with the order of the Judicial Magistrate and vide order dated: 08/09/2022, disposed of Crl. Misc. Case No. 06 of 2021 accordingly.

Mathrubhumi Printing and Publishing Company Limited have challenged the order of the High Court of Sikkim before the Supreme Court of India in Special Leave to Appeal (Crl.) No. (s) 11187/2022. During the course, Mathrubhumi daily regretted its action of publishing a derogatory news article against Santiago Martin and agreed to publish the statement of regret in their Malayalam newspaper “Mathrubhumi” in a prominent manner. Although the issue between Santiago Martin and Mathrubhumi Printing and Publishing Company Limited is resolved as the publication has tendered an apology, the Criminal Complaint Case P.C. Case No.09 of 2020 will continue with respect to Dr. T.M.Thomas Issac, Former Finance Minister of Kerala, in the Court of the Judicial Magistrate 1st Class at Gangtok, Sikkim. The former minister has to face the trial.

Who is Mr. Santiago Martin?

Mr. Santiago Martin is the founder & chairman of the Martin Group of Companies. “The story of his life is one that epitomizes the success of a man who built nothing, into an empire”. Having started from the humble beginnings with his roots in simple business ventures as a trader, he has managed to create one of the largest business empires in the nation today that spans across the country and beyond. Beginning with his first steps of growth in the lottery industry at a tender 13 years of age, he had managed to develop and secure a vast marketing network of the buyers and sellers of lotteries all over India, largely in the south, where they established Martin Karnataka, in the north-east, he opened Martin Sikkim Lottery, West Bengal, Punjab, and Maharashtra. Having attained a position of leadership within the trade over years of innovation and marketing in business operations promoting an average annual growth of approximately 109%, he is now regarded as the “Lottery King” of India. With a professional strength of more than 1000 committed staff working in the organization and more than 260 stockiest in all lottery playing states, his enterprise has transformed into more of a community that has enabled the benefit of millions, perhaps billions of individuals, dependent on the industry for welfare and livelihood, both directly and indirectly, both then and now. In addition to his passion for enterprises driven by technology and a quest for fresh investments, his qualities as an entrepreneur have greatly enabled him to diversify into multiple business ventures.